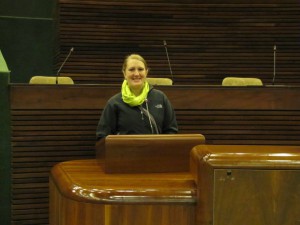 Me, pretending to read an 18 hour speech like uMntwana wakwaPhindangene iNkosi uMangosuthu Buthelezi at the former KwaZulu Legislative Assembly in June 2014.

I am an Assistant Professor of History at Southern Methodist University with a PhD in African History from Michigan State University. My current manuscript project, Only the Fourth Chief: Violence, Land and Chiefly Authority in 20th Century KwaZulu-Natal, examines the historical roots of South Africa’s transition-era civil war and competition over land and chiefly authority in twentieth-century KwaZulu-Natal. My work has appeared in the African Historical Review and is forthcoming in Journal of Southern African Studies. I teach classes in African and South African history that employ both traditional teaching methods and digital pedagogy. You might also know me from emails as one of the NEWSA Program Coordinators.