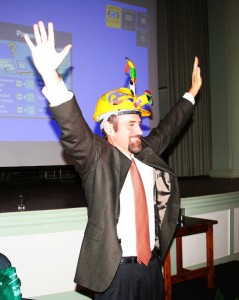 I am Professor of History at Michigan State University and Director of Digital History Projects at Matrix.  My most recent book, co-edited with Chris Bolsmann, is Africa’s World Cup: Critical Reflections on Play, Patriotism, Spectatorship and Space. I am currently working on a book project on digital African history and co-editing a special issue of Radical History Review titled “Historicizing the Politics and Pleasure of Sports.”

At MSU I developed undergraduate and graduate seminars in South African history that combine “analog” pedagogy with digital education tools, technologies, and methods. On the digital front, I co-host the Africa Past and Present podcast with Peter Limb; blog at Footballiscominghome; and convene the Football Scholars Forum.

My first NEWSA was in 1997—the first and only one not held in Burlington. I served on the NEWSA Politburo (aka Program Committee) from 2008 to 2013. But that was before we sold out and became just another corporation. Follow me on Twitter: @futbolprof