In many ways it is an exciting time to teach African history. Increasingly, students recognize the continent as a potential place for investment, human rights activism, artistic inspiration, or journalistic inquiry. On the other hand, all of my classes fulfill the university’s “global engagement” and “human diversity” curriculum requirements and some students admit they enroll because they have to and they are none too happy about it. The challenge became how I could develop course material and assignments to bridge this divide. How could I get students who were already interested in the continent, but saw it passively as a place to be acted upon or intervened in, to engage with its people and its diversities? And how could I get the less excited students to see the value of African histories?

Digital projects enabled me to facilitate the development of historical and critical thinking, research, and writing skills as well as get students to rethink Africa and their place in the world.

Every fall, I teach an Early African History survey course, intended as an introduction to the histories of Africa to 1850. We cover the basics: Africa as the birthplace of humanity, technological innovations, growth of states, spread of Islam, interactions with the world. You know, the entire continent, from the beginning of time. For most of the students, this is their very first encounter with pre-colonial Africa (well, other than what they learned watching The Scorpion King). The lessons alone should break some of the stereotypical perceptions of the continent.

But challenging popular images of Africa was also my goal when I made the decision to use Twitter in the classroom. I recognized it could encourage alternate forms of class participation, but with students majoring in journalism, human rights, business and engineering I wanted them to think critically and to prepare them to engage with the continent as a place of 54 countries and diverse experiences.

Twitter in the classroom is part of the digital humanities revolution and has been written about elsewhere (see, for example, here, here, and here). But as Natasha Chtena points out in her “7 Things I Learned From Teaching with Twitter,” some of these guides can miss the point:

Every class has different needs, and thus Twitter integration cannot be theorized in a one-size-fits-all kind of way.

Thus, I want to briefly outline my assignment and share what I think are some takeaways for Africanists. We all joke about the preconceptions our students bring to class, or how we still find “Africa is a country” in essays despite all of our efforts. I use Twitter in the classroom to help them apply our class lessons about the continent’s diversity in their consumption of media.

Just created a "Africa is not a country" tag while grading with @turnitin. #twitterstorians pic.twitter.com/qMbqWcGkhe

I introduce the assignment during the course’s first discussion session on historical and contemporary images of Africa. As we cover the prevalent images of the continent seen so often in the press and popular imagination, we also talk about the roles we play as consumers of media and the ways in which social media can be used to counter some of those stereotypes. In preparation, they read and watch:

I relay my expectations and concrete goals for the assignment in a handout. Students are responsible for at least one weekly tweet: an article, photo, poster, event on campus, etc. that perpetuates common images or challenges them. They should respond to at least one of their classmates’ tweets. I give them a class hash tag #SMUHIST2391 to help connect everyone.

To make it easier on me, I planned to use Martin Hawksey (EdTech Explorer)’s Twitter Archiving Google Spreadsheet to keep track of it all. I tend to not follow through with this, as it is just as easy for me to follow the Twitter conversations on my own and know who participates and does not.

We open most classes with the Twitter project. I browse their tweets before class to prepare but we also view them via #SMUHIST2391 on the classroom screen and talk about our posts. Some days these discussions are just about current events. In other classes, we have posts that directly apply to course material. A student posted the link below, a week after we discussed the oral historians of Ancient Mali and the epic tradition of Sundiata, enabling in-class discussion of modern-day griots and music.

I have written about some of the more practical lessons I have learned in some detail here, so I want to focus here on the value of the assignment. These digital methods encourage students to be more active learners and engaged citizens. In some of their posts, I can see the how they are applying critical thinking skills developed in the assignment to everyday life and the media they consume. While other posts might be a bit bland or even unintentionally perpetuate some stereotypes, they provide a starting place for conversations in class.

It also changes the class dynamic for the better. They find the craziest things. As the semester goes on, they really get it into it. These kinds of extra-classroom conversations facilitate open and spontaneous discussions about course material and current events.

So someone put in a lot of work into generalizing a whole continent… #SMUHIST2391 http://t.co/FlaLnGT8b8

It has also been rewarding for me, particularly this semester as Ebola arrived in Dallas. I can easily share with them some of the better reporting for consumption and discussion. But I can also see in our discussions how our earlier practice in critiquing popular images of the continent allows students to interrogate the news and the language of hospital and government officials.

A digital history project, a “virtual internship” with South African History Online (SAHO) provides the structure for my History of South Africa class. Framing the course with this assignment means student do not only learn about history, they create and share it, contributing to a larger mission.

I open the course with a discussion about African history during colonialism and apartheid. And I introduce them to SAHO. SAHO is a non-profit organization with a mission to promote history and the arts and to address the inequalities in South African written history. SAHO involves heritage and academic institutions as well as ordinary South Africans in rewriting South African history to contribute to reconciliation, the building of a common humanity and a non-racial, non-sexist and democratic society. Omar Badsha, SAHO’s photographer-activist founder, Skypes in to meet the class and tell them about SAHO and South African history. Introducing students to Omar, SAHO, and new scholarly efforts in South Africa personalizes history for the students and gets them excited about history. 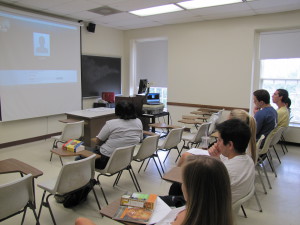 The ability of students in Dallas, Texas to conduct primary source research on South African history and contribute to SAHO’s mission is made possible by the proliferation of online digitized resources. Post-apartheid South Africa has dealt with its history of human rights violations in creative ways that resulted in an exciting range of digitalized primary source collections for students to use in the production of original scholarship. The availability of these sources in the U.S. and the needs of SAHO shapes how we decide upon topics for the students to tackle. Prior to the course, I Skype with Omar and project director Jeeva Rajgopaul to develop a plan. The first year, students all did projects around the Truth and Reconciliation Commission on account of the accessibility of those documents. The following year, some students undertook further TRC projects and others contributed to SAHO’s plan to commemorate 20 years of democracy. This year, SAHO identified several topics around women as an area in which they hoped to expand and students are about to embark on the projects.

I design the project around several different assignments, building towards the final submission to SAHO. The initial essays enable students to develop the fundamental skills of historical research, critical thinking, analysis, and clear writing they will need to undertake the SAHO assignment. The students practice their secondary source analysis in a book review, learning to identify arguments and analyze evidence. They develop skills in interpretation and analysis in a primary source examination. They then turn to the project itself, with a proposal, outline, and two drafts before submitting the final paper for inclusion on the SAHO website. (Yes. This is a lot of grading. But the course has a university curriculum “writing” tag with specific page requirements, so I have to grade a lot anyways.) Across the semester, the students pair with partners from SAHO who help them develop their projects via regular Skype sessions. SAHO designed a “guidelines” packet in their first pilot collaboration project with Jon Soske’s McGill students. We distribute this to the students to facilitate standards and address any challenges.

Via the virtual internship, the students not only learn about South African history and primary source research, they are doing history and assisting SAHO in their mission to rewrite history and make it more accessible. They meet South Africans who are excited about history and come away from the project with an understanding of the significance of history in contemporary life.

To view the fruits of the SMU-SAHO virtual internships, visit:

In sum, these digital projects allowed us to build a more vibrant and engaged classroom community. My hope is that the development of these critical skills and the connections with South Africans will also help them be better members of local and global communities.

In our comments and discussion at NEWSA, I hope we might discuss some of the challenges of digital projects as well as the other more personal academic benefits I recognize.

← On Building a Digital Repository
Flows and Counter Flows: Social Media, African Audiences, and the News →